Patricia Ellen: "Girls Can Be Leaders in Anything They Want to Be" 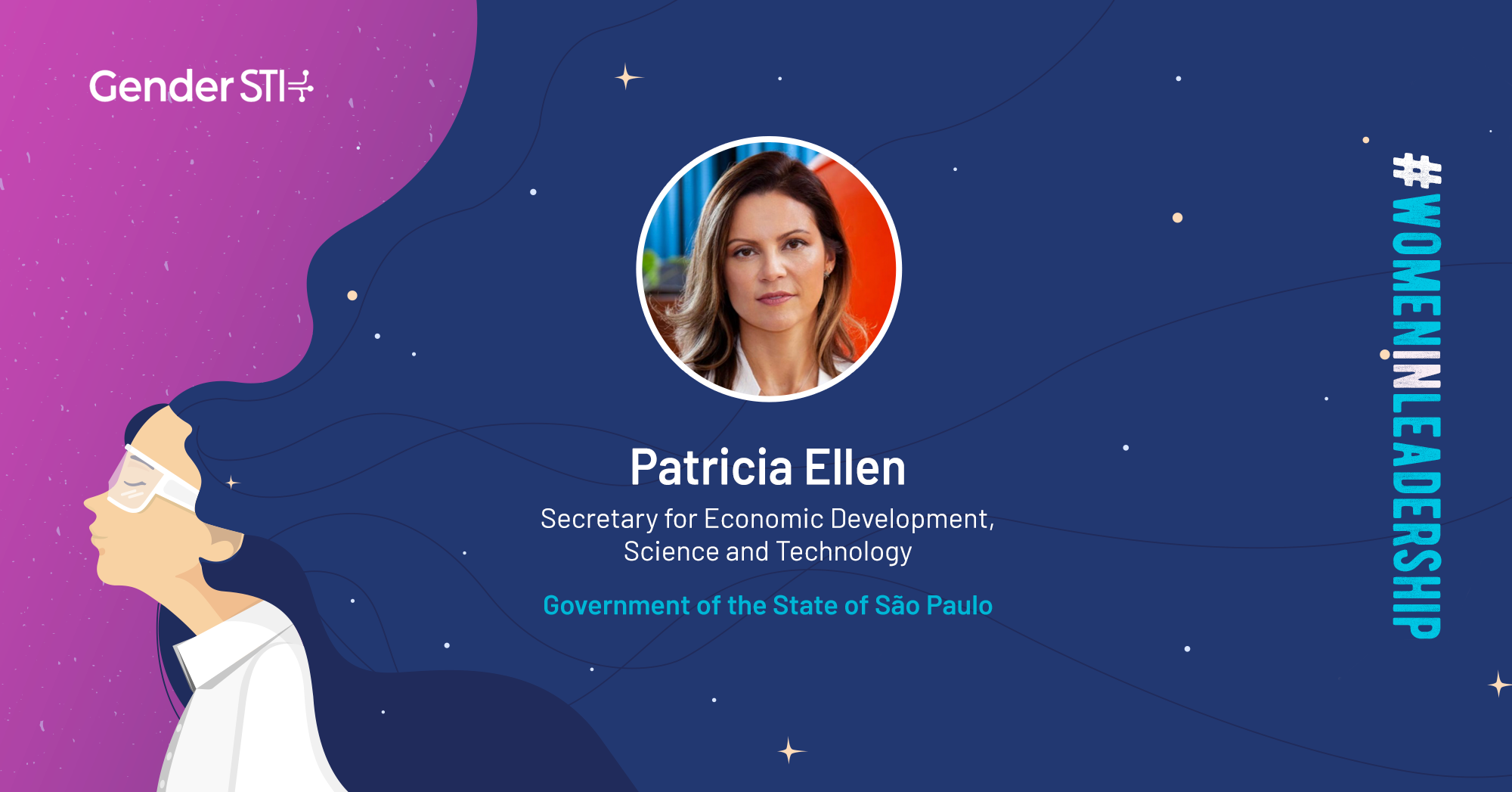 Patricia Ellen was nominated for Gender STI's #WomenInLeadership Campaign, which celebrates women leaders in science, technology and innovation, by the Universidade de São Paulo in Brazil.

She is the Secretary of Economic Development, Science and Technology for the State of São Paulo. Ellen was president of Optum in Brazil, a health technology company of United Health group. A former partner at McKinsey & Company, she is a Professor of Leadership and Digital Innovation at the Master in Leadership and Management program at the Centro de Liderança Pública. Ellen was a member of the Development Council of the Presidency of the Republic. She is co-founder of the Agora Movement and was named Young Global Leader by the World Economic Forum in 2016.

Ellen spoke to Gender STI about her experience as a woman leader in honor of International Women's Day 2021.

As Secretary of Economic Development, Science and Technology of the State of São Paulo, my job is to promote an inclusive, innovative, and sustainable economic development model, based on improving productivity and global competitiveness of production chains, attracting investments to the State of São Paulo, strengthening our economic centers, overcoming inequalities, and fostering cutting-edge technology.

My main responsibilities include coordinating the State’s programs for employability, entrepreneurship, vocational training and income generation programs. We are also in charge of fostering investments in science, technology and innovation. Through basic and applied research programs, we promote collaboration across public universities, support startups and government innovation. We are currently launching our local “Silicon Valley,” called CITI, an International Centre for Technology and Innovation and building the foundations for a global Centre for the Fourth Industrial Revolution.

To be a woman in the public sector is a challenging task. This is true for many other setups as well, but particularly for the public sector, there is an additional challenge as it is a place where many traditions and old habits still prevail. For a long time, politics and governments were ruled solemnly by man, so many are not used to seeing a woman in a role of leadership.

I believe the best way to handle this is to stay strong, speak up, ask for help from both women and men and commit to constantly open more opportunities to more women in power. The journey to have more women in leadership is challenging but we will never thrive if it becomes a solo path. As we come together and help each other, hopefully, in a few years, a woman leader won’t be something as unusual anymore.

As a leader in public management, my ultimate goal is to help those who need it the most. I wake up every day thinking about what else my team and I can do to strengthen our programs to fight inequalities and reach the most vulnerable population. Especially given covid-19 pandemic, most of my energy is centered towards investments in science and technology to implement a data driven approach to contain the spread of the virus, accelerate vaccination, manage a responsible economic reopening plan and generate job and income opportunities.

On a second note, as a mother and a female leader, I feel the weight of the responsibility of being a role model of a purpose-driven leadership style. Moreover, it is my duty to give the right example and open space to more women in decision making – especially in tough times like these. Because of this, one of my goals is to prepare other leaders and to inspire those around me to be better and make the world a better place.

We still have a long way to go in this area. Although we have a balanced distribution on the bottom of the pyramid for STI, this situation changes dramatically when we look at higher rank positions. Unfortunately, there are few women on the top of the pyramid, and, because of that, decision-making is still largely led by man.

To change that, we must first acknowledge the problem and be aware of the biases and difficulties that surround the theme. Leaders in STI - both men and women - must put in a conscious effort of supporting women in their team and giving them opportunities to thrive.

Although we still have a long way to go, we must acknowledge that a great effort has been put into raising awareness about how girls can be anything they want to be. To that, I’d add that “girls can be leaders in anything they want to be.” It is important to include the word “leaders” in that, so that young girls understand that that can not only become scientists but also lead science and technology decision-making. Inspiring others, coordinating teams, solving complex problems and other responsibilities like that are part of being a leader and we are not used to teaching young girls to aspire such things, but we can do that.

Women are often taught to doubt themselves on so many dimensions. I am a mother of two girls, and I want them to able to do whatever they want, strive in whatever they love. What I hope for them professionally, and for all young girls and women, is to always aim high, trust their potential and own the confidence to reach their goals, leading teams into doing great things.

Yes! Nowadays there is a significant part of STI projects in developing countries which are funded by multilateral institutions, sovereign national funds, foundations, and other institutions of the kind. There is a unique opportunity of working with these organizations to include specific requirements for their funding related to gender equality and diversity as a whole.

For example, when drafting contracts, these institutions can include clauses that condition the funds to a specific target of gender inclusion. So, for instance, resources will be released only upon verifying that the project team has at least X% of women in their leadership team and Y% of women in their team overall.

Besides motivating women to join the field and raising leaders’ awareness, there are some concrete actions that can be very helpful. For example, structure mentorship and sponsorship programs within STI organizations that can help women receive the support they need to thrive professionally. It is also a great way to summon allies and create engagement on the topic.

Another example is advocacy for the theme at different levels and different areas of the STI institution. Events, trainings and even one-on-one feedback conversations are key moments to be leveraged, calling out opportunities and discussing paths for growth.

Finally, it is important to mention that only with more women in leadership roles at STI will we have more policies for gender equality.