Salma Jalife: "It's Very Important for Women and Girls Not to Abandon Their Dreams" 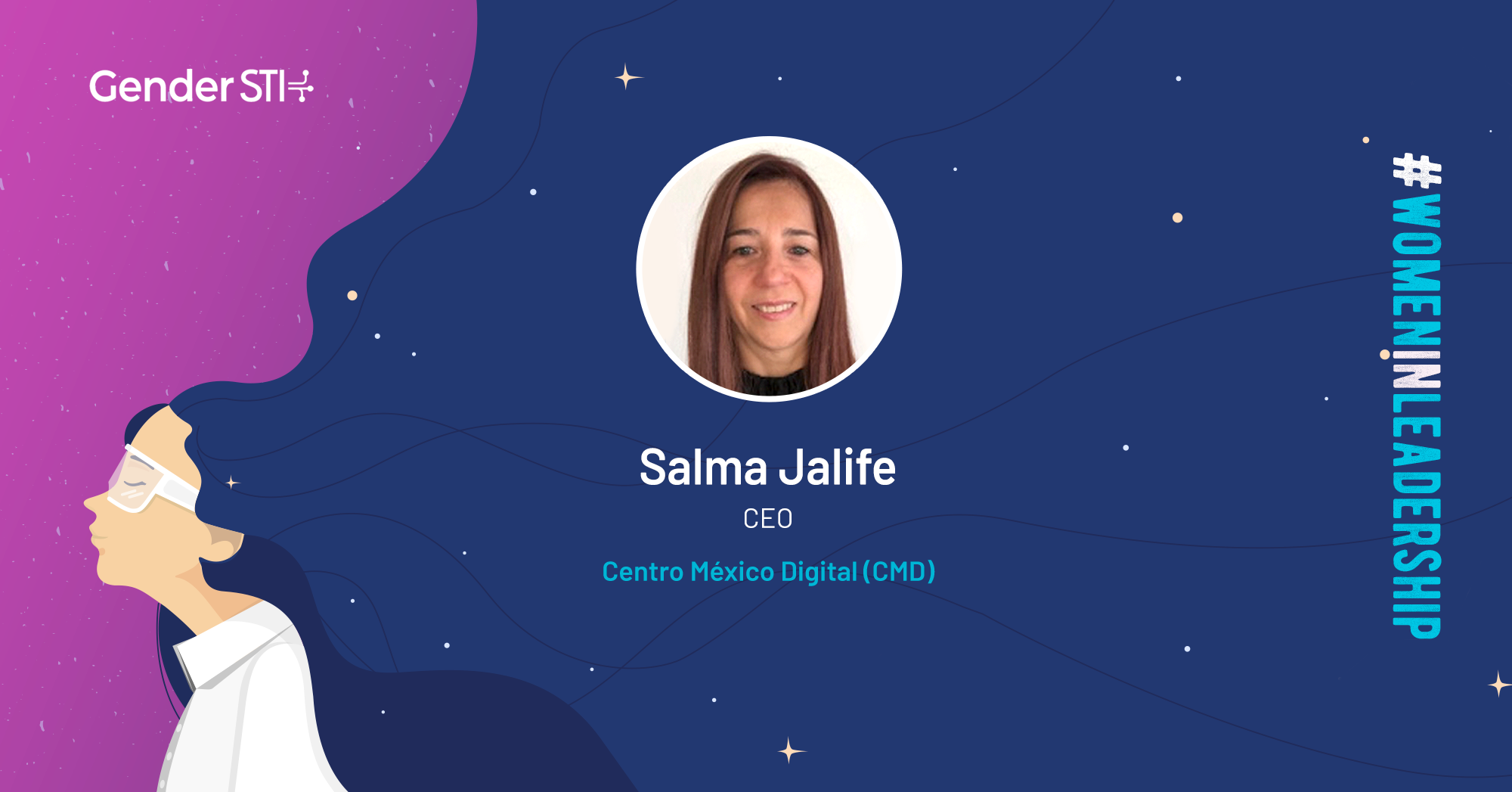 She is the CEO and founder of Centro México Digital (CMD). Previously, Jalife was the Subsecretary of Communications in the Department of Communications and Transport of the Mexican government. In addition, she was the International Relations Coordinator for the Corporación Universitaria para el Desarrollo de Internet (CUDI), where she worked to promote the use of academic telecommunication networks in health, education and ICT with national collaborative research projects on a regional, national and global level.

Jalife spoke to Gender STI about her experience as a woman leader in honor of International Women's Day 2021.

I am the CEO of a recently created Think Tank named Centro México Digital that will focus on the digital transformation for micro and SMEs in Mexico. Mexico’s economy relies on these types of enterprises and 90% of Mexican employees work in a micro or SME. Unfortunately, according to the 2019 Economic Census by INEGI, 79% of these enterprises have not digitized their premises or their personnel. One of the reasons is that they do not have access to Internet services. The 21% that are connected do not profit from this access to the Internet as they do not have a digital presence and barely incorporate digital services into their daily commercial activities. My job will be to address research studies with innovative ideas to accelerate the digital transformation of micro and SMEs in Mexico using disrupting technologies in responsible ways.

Sometimes. The main challenge is to be noticed by leaders either at the university or in your professional career. If you perform average, it is clear that men leaders will select other men. But if you develop your activities in creative, innovative and agile ways you will definitely be taken into consideration as a leader. Women have two jobs at least, the professional one and your job at home. So we have to be twice as efficient if we want to become leaders in the professional arena. However, we are also able to change this situation if we commit to it. A task-oriented organization at home may lead you to share your responsibilities with family members and release the burden on yourself. You will make them aware of the role they have to play when there is a proper distribution of those responsibilities and make them, or your spouse and children, feel that it is also their home. As a leader in the professional arena, the same principle applies, you have to trust in the responsibilities you delegate to those who are under your leadership, provide guidance and lead by example when necessary.

My main goal is to make sure I am acting like a leader that is known as someone that can share their knowledge and help others become leaders, too. My second goal is focused on using my leadership and knowledge to help this world become a better one for those who did not have the fortune to be born out of poverty or with all their capabilities (physical or mental). My third goal is to help our society to be more conscious of our planet Earth and our Solar System. We need to move out of the box and start acting green.

Women have a disproportionate share of decision-making positions in STI in developed countries, however, they are vastly underrepresented in developing countries. The shares may vary but even though in certain countries the workforce is already composed of women by 50%, there is still a huge gap in women in decision-making positions and when they reach those positions the payment gap generally lies around 23% less than for men.

The national demand in STEM has been increasing since 2019. However according to Pew Research Center, women still face discrimination to occupy decision-making positions for the following reasons: 1) earn less than men doing the same job; 2) are treated as if they are not competent; 3) experience repeated small slights at work; 4) receive less support from senior leaders; 5) feel isolated in the workplace; 6) are passed over from important assignments; 7) are turned out for a job; and 8) are denied a promotion. This is true for the U.S., but I completely agree it may apply anywhere else. The introduction of new gender laws in the workforce reinforcing human rights and gender equality are gaining momentum and we may find in the next few years a change in the gender balance in decision-making.

While there are increasingly more girls entering STEM careers, there are still biases, social norms and family expectations, factors they must face in order to be able to succeed as leaders. However, it is very important that they do not leave their dreams to become what they believe they can be in the future. I suggest they relate to women leaders in the field they want to pursue, seek mentoring from women groups in their social networks, read success stories about women overcoming discrimination and barriers to become leaders, and above all, focus on accumulating knowledge and expertise in their academic development. Teachers, men and women, who promote growth for young girls and women are great allies.

As I mentioned before, there are several groups actively participating in the support and mentorship for young girls and women to become leaders.

International organizations also provide a series of initiatives that may be of help for different countries. They may provide policy frameworks for gender equality in STI, online courses, participation in “hackathons” contests of diverse purposes, grant study support mechanisms, include toolkits, reports, indicators of women in activities in STI for different countries as well as different types of networking opportunities and experiences.