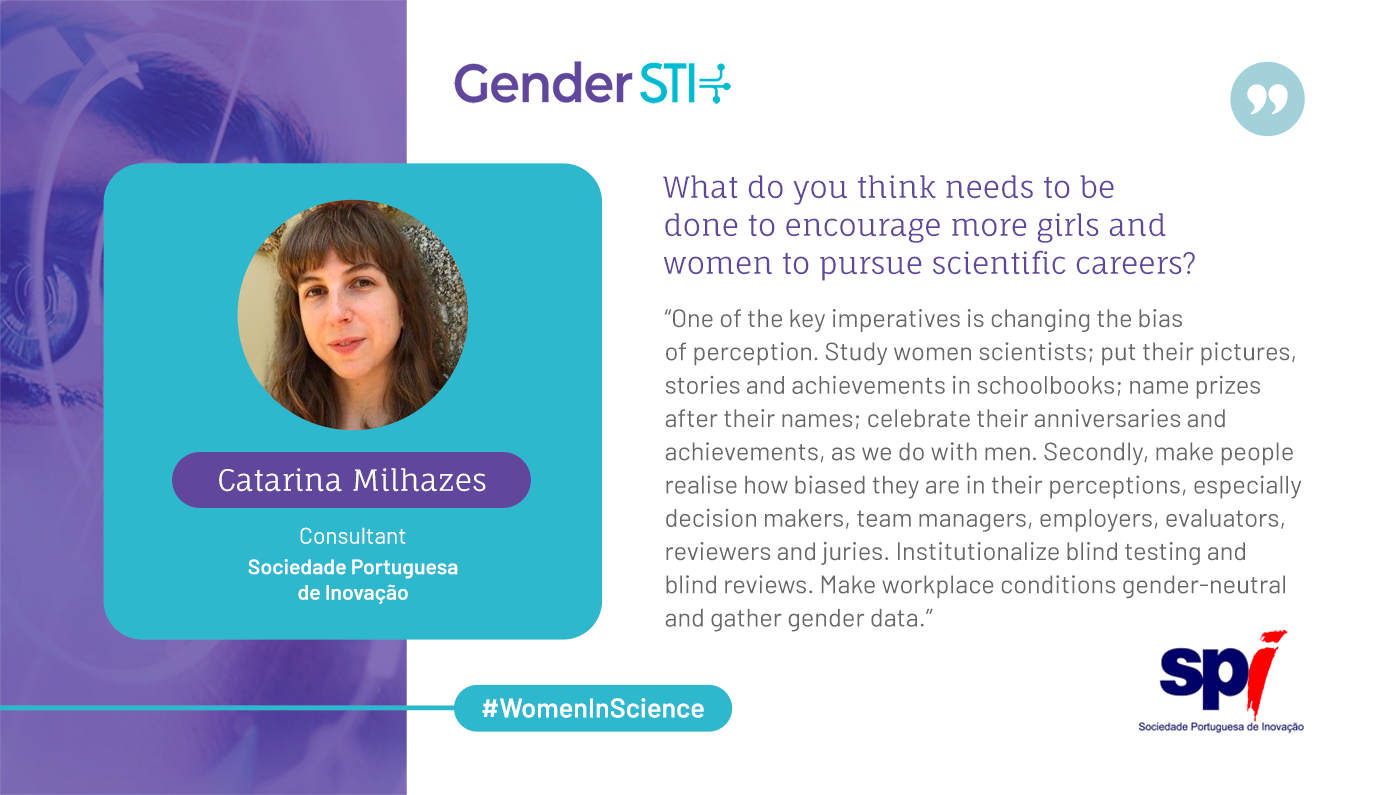 A critical challenge facing women in science is the perception bias. Catarina Milhazes, an international cooperation and development consultant at the Sociedade Portuguesa de Inovação, explains that tackling bias begins by addressing how we teach brilliance at a young age. Meet Milhazes, a passionate and thoughtful advocate for women in science.

What is your job position and why did you decide to work in science, technology and innovation? What does your job entail?

I work as a consultant in international projects focusing on cooperation and development. I have taken up different positions depending on the project and its topic, such as diplomactic assistant, researcher, education expert, teacher/trainer or cooperation officer.

I think it is not surprising, and it shows that we still have a long way to go. Important steps are being taken to correct women’s under-representation in different fields of study and work. However, one of the last things to change is always people’s perception, their references. And in a world where we constantly talk about meritocracy and achievement, we have to think carefully of how we, as society, influence the way boys and girls around the world perceive merit, brilliance and achievement.

One of the most important things we must do, in my view, is to change the bias of how we teach brilliance to children. References have to be balanced: We need to study brilliant men and brilliant women alike, in all areas. Studies have shown that by the time children enter the education system, their perception of scientists suddenly changes. At the age of five, kids, both girls and boys, believe women can be “really, really smart,” and picture scientists as both men and women in reasonably equal rates.

Brilliance is taught with bias to boys: In schools, we talk about men scientists much more than we talk about women scientists. Gradually, girls start perceiving that science, brilliance and great minds don’t apply to them. This might well be the cause of behind the fact that academia is very much still male-dominated, especially in specific areas such as in STEM. This might also explain why boys in advanced years of schooling, such as in universities, tend to see their female teachers as less qualified.

In my understanding, it also proves that what we need is not simply a quota for equal gender representation. What difference does it make to have a 50-50 representation of women and men teachers, or of women and men scientists, or of women and men politicians, if women are still perceived as less qualified? Are we willing to let everyone think that women are in those positions just to meet the determined quotas? Defining quotas might be beneficial, but what is essential is the transformation of perception from a very early age. Make girls and boys see that women can do as much as men, that they have equal capacities, that girls are “really, really smart,” as boys are. Changing the perception bias is really a very important step.

I am Portuguese, a European citizen. I’ve worked with communities in Morocco and Guinea-Bissau. I’ve seen and heard from girls fighting for their right to education and their place in the labour market. This is my message to them:

In the face of all adversity, your will plays a key role in your path. Inequality, frustration, inaccessibility, difficulty and injustice are not strange words to a high number of girls like you around the world. You have achieved a lot just for being where you are today – so don’t lose you way just now. You have completed more years of schooling than your mum did, as many as your brother, male-cousins and male-friends – and always remember that those boys are your partners, not opponents. You have defied those who thought girls were less intelligent, less capable, less brilliant. You have proved that girls are strong. You studied hard and many times late into the night after helping mum and dad with all the housework. You walked tirelessly to school, many times at the crack of dawn, as school is too far from your home. You stood strong when others judged you as less intelligent because you were too feminine looking.  You did it all up to here because you have the will, because you know what you want and have fought for it.

What do you think needs to be done to encourage more girls and women to pursue scientific careers?

One of the key imperatives is changing the perception bias, as I mentioned in a previous answer. Study women scientists; put their pictures, stories and achievements in schoolbooks; name prizes with their names; celebrate their anniversaries and achievements (as we do with men). Secondly, make people realise how much biased they are in their perception, especially decision makers, team managers, employers, evaluators, reviewers and juries. Institutionalize blind testing and blind-review (did you know that female-authored papers are accepted more often or rated higher under double-blind review?). Make workplace conditions gender-neutral, and gather gender data – how many women/men submissions vs. how many women/men approved? Why? What did we (not) appreciate in women candidates vs. what did we (not) appreciate in men candidates? Do we ever undermine/favour an applicant/worker because of her/his family condition (being/wishing to be a mother/father)? These are some of the questions that have to be on the top of our minds.

Perhaps I could leave a question for thought: How much can we achieve if more women participate in science?

The pandemic crisis has, in many ways, been food for thought in what regards as gender-equal opportunities and participation.  Around the world, women make up 70% of the frontline workers in the health and social sector. This includes doctors, nurses, midwives, cleaners and care workers. What would have happened if we could not count on them?

In our homes, during lockdown, women spend a higher amount of time than men with home schooling of their children or grandchildren. During lockdown, women work the same amount of time or more (as happens with frontline workers and many home-based workers, who work longer hours) and stack more housework tasks (more cooking with kids at home, support with home schooling, more attention required from toddlers with nurseries and kindergartens closed, caring for the sick and old members of the family, etc.).  Women have been keeping their communities safe and have been working more, but have seen their paid working time reduced to a greater extent.